Ewok is doing great, she’s almost ready to spend the nights in the barn with her siblings. Gluttony and Sloth are living up to their names surprisingly well. Scotch’s kids were named Cider (the boy) and Vodka (the girl) they are all growing rapidly! Tequila finally had her kids about a week ago and she turned out to be a wonderful mother, she had a larger buckling- Wrath, and a small doe with a single silver stripe on her back- HG Mercury. Wrath looks like a snowball.
Suede had her kids Saturday night, go figure had to kid on one of the coldest nights in a spell. She had triplets, two doelings and a buckling. Sadly the buckling was dead when we found them, probably froze to death is our best guess. The doelings are doing great now though, a little red and white one- Scarlet Sunrise and a buckskin- Piper’s Paradise.
Friday night and Saturday we got sleet and snow so not much else has been happening. The last nativity we were scheduled for was canceled due to ice but the Night in Bethlehem in Augusta went wonderfully.

County Fair ended yesterday with the yearly clean up, it seems to signal in bold that summer is almost over.  School is coming back into session in two weeks.

This year’s County Fair was interesting, to say the least.  Quite frankly I can’t remember half the days because of how busy I was.  But to cover some highlights, at least in my week,  I crocheted another goat blanket, this one a gray camouflage color for Ghost, Kennzy’s kid this year.  The blanket received Grand Champion in the open class.  My two paintings that I took for 4-H did really well  too.

Sadly only one of our (my sister’s and mine) market wethers made weight and he was just barely within weight.  You see, in 4-H you can sell your market animals on the last night of the fair, if they are within weight.  For goats the weight is 60 pounds and greater.  So out of the three, Hephalump, Loki, and Shakespeare, only Loki made weight.  At the scale house last Saturday he came to only 60 pounds.

That was Sunday night.  Monday night we got a lot of rain.  The dairy goats flooded out along with a lot of the meat goats and the show ring.  My two little girls, Charm and Ghost, were standing belly deep in water at 10 pm.  We didn’t know about the flood until Tuesday morning, the morning of the dairy show.  Barbie won Grand Champion Nigerian, and Kennzy received Reserve.  If Caramel Candy had been freshened she very well may have come away with Champion.

Later this month I’m picking up another doe from Dill’s-A-Little goat Farm.  I’m really looking forward to bringing her home.  Kidding will start in November with Edelweiss.  Then in December the new doe along with Tiki, Scotch, and Kalypso.  We are praying that this coming kidding season will go better that the last.

Well, I’ve had an interesting day. Took PSAT this morning, found out about two hours later how to do the final math problem.  Fun.  Got home today and checked my email: promptly got cussed out by a person on YouTube for trying to tell a couple others to quit being so rude to the first person.  I’m so glad people are grateful.  Then got on here… I haven’t had a lot of time to keep up with the inbox of comments that are more-than-likely spam and found I had several spam messages with really interesting sender names. Why can’t the spam filter pick up more of the messages that are really, really weird?

Anyhow, about the goats which is probably all the few of you reading this are interested in. We’ve got half of our herd out on a boys’ ranch right now eating the weeds out of their lagoons.  Hopefully Diago and Pharaoh will find permanent homes with the boys out there. 🙂  The kiko does are all planned to kid in January  or February and the nigerians will be kidding about March and April.  I’m looking forward to seeing all the little babies again.

I can’t think of much else to update without going into a rant that no one wants to hear.  I hope you all have a good evening. 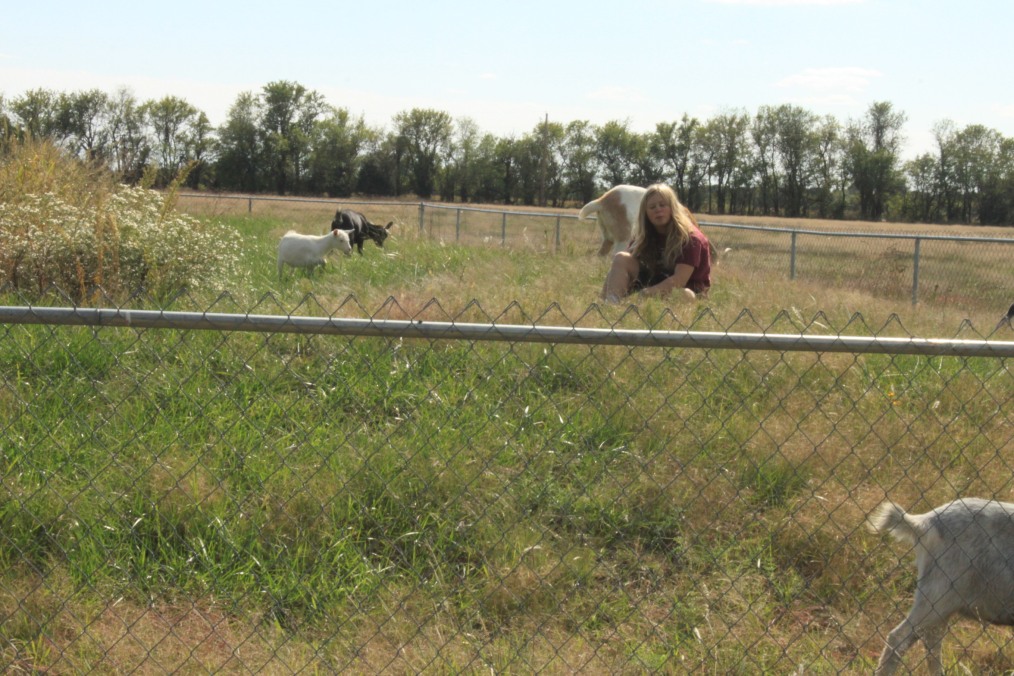 above: my sister sitting with  the goats on the ranch

Above: The kids are so helpful with putting up their shelter. Later they were found standing on top of it when it was up. 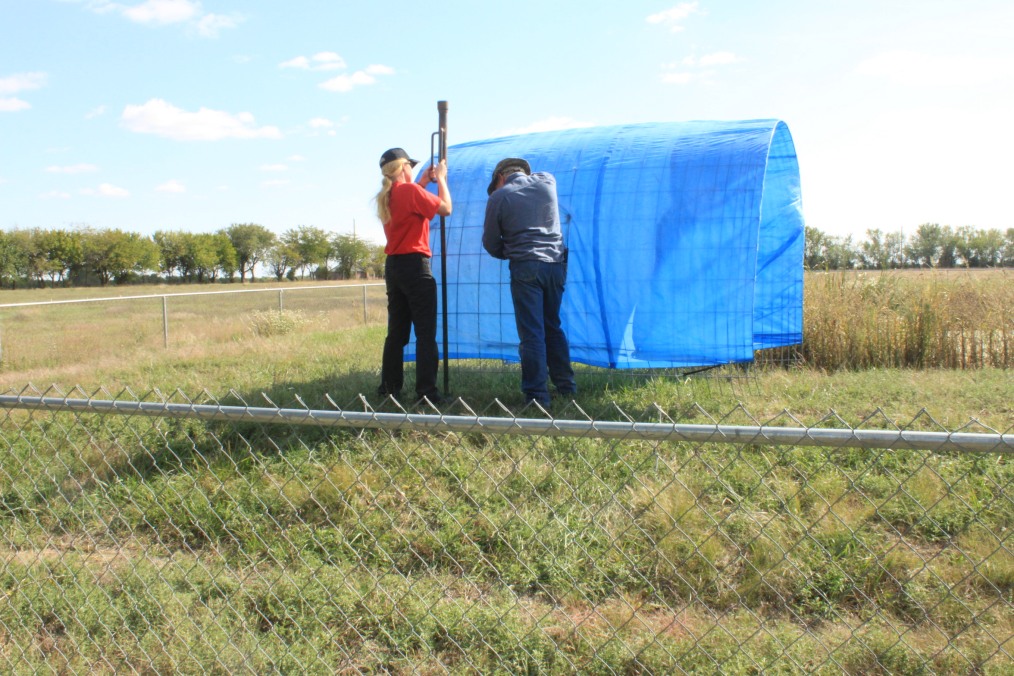 Above: Driving T-posts is an art… not really, I just got nominated to drive them while my dad held the panels to the U shape.

Thanks to the help I got from the help forums I’m back to being able to post.  🙂  And just a thought, I decided to post some of the projects my sister and I have been working on recently.

I think I’ll start with my sister. Earlier this year when we butchered out the wether she had raised, my sister decided to try to tan his hide.  It worked out beautifully, sounds morbid to put it that way…  Any how, later in June when we sold a goat and butchered it out for the buyer she tanned its hide also.  I’m just going to post a couple of pictures of each hide.  They were tanned with hair on.

The back of the doeling’s hide that was butchered and tanned in July. 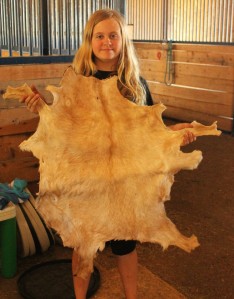 The hair side of the same doeling

The back side of the wether’s hide butchered in February.

The hair side of the wether’s hide butchered in February

Well I’ve been playing with drawings, trying to see if I could do little comic strips of our goats.  There are tons of comics with cats and dogs doing stuff.  Why not goats?  They’re just as crazy if not crazier after all.  So here are a few of my first tries:

I get all the ideas for the cartoons from the goats.  This one I was out finishing chores and got a chance to just stand and watch the kiko and nigerian dwarf kids play for a little while.

Just the inspiration though.  I thought after watching Magpie, one of the Nigerian Dwarf kids hopping around, what if a kid really had a dream of actually flying?  So with the help of a cattle egret who was in the pasture, she hijacked a bucket to fly.  Sadly the scanner cut off her mother on the ground who is totally freaking as her daughter flies up and away.

Caricatures:  Another part of this whole cartoon thing is drawing little caricatures of the goats.  Especially the ones with shining personalities.  Puma’s started as a joke because he was wondering loose in our barn during chores with a lead on, but to keep him safe the black handle of the lead was hooked over his horns.  I looked over and saw him, a chain hangin’ around his neck and a black band around his horns and jokingly called him “Gangsta goat”  and this is where it ended up: 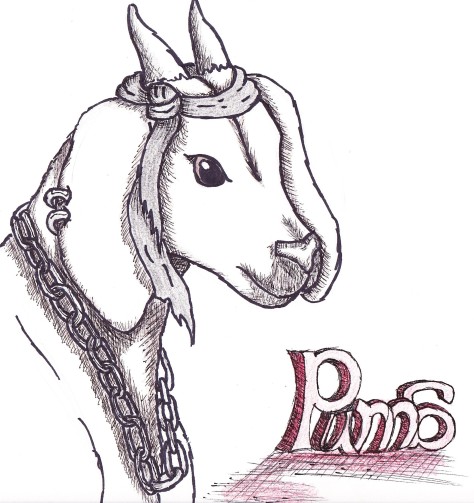 And for anyone curious.  I’m planning on posting more of my cartoons as I finish them.  Hopefully the next one will be done soon. 🙂

Well, I’m not sure if I’m supposed to post this, but I have a new website that I’m building up. Trying to get our herd out there so there might be more buyers.
Anyhow I’ll still post on here for anyone interested about more news around our farm.
Here’s the link:
bbgoats.com

Guess what, on March 14th, the day after Kitty and Magpie were born, my sister’s Kiko, Mocha, had her kids. Given that it was pi day (3/14) she decided to name one of the twin doelings after that. In this post I’m introducing American Pi and Blu Moon. The first two purebred Kiko kids born on our land (B B Goats). We didn’t get a chance to see these two born, got home from school and found them already dry in one of the stalls.

My sister holding American Pi and Kitty. Blu Moon is behind her leg and Mocha checking out Kitty.

Blu Moon looking out at us from under Mocha just after we found her.

A few hours after birth we took all the kids outside with their respective mothers so the does would have a nice grazing opportunity out north of our barn. (No they weren’t shut in all day, just took them out when some of the humidity died down).

American Pi shortly after we found them.

My sister holding American Pi while we were outside.

Crash time for the kids. It’s been a long four or so hours…

alexbks65
Create a free website or blog at WordPress.com.